Proclaimed as the world’s most exclusive club, with membership restricted to TT racers, the true purpose of the TT Riders’ Association is a mystery to most enthusiasts. It’s a mystery no more! 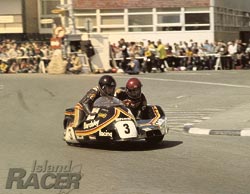 To most TT regulars the sole purpose of the TTRA is to gather together the aged riders, and equally ancient machinery, that form the now traditional TT Lap of Honour. Although this living feast of TT history has great significance, and is the only true opportunity for today’s enthusiasts to appreciate the pioneers of real road racing, it is just a small part of what the TTRA is about. The Mountain Circuit lap and the similar event which takes place at the Ulster Grand Prix are just the tip of the significant iceberg that is the TT Riders’ Association.
The mix of manufacturer-supported riders on works machines and penniless privateers on homebuilt bikes which you can see at today’s TT is not new in road racing. It was this unequal struggle that provided the original inspiration for the TT Riders’ Association. Way back in the 1940s and 50s, works stars had contract clauses which included accident insurance, and even funeral expenses. The rest of the pack spent a year’s salary just to compete in the world’s greatest road race and they had nothing left for such cover. Consequentially when things went wrong these events invariably brought about untold hardship for the riders’ unfortunate families.

During the 1949 races a rider crashed and was killed. Having no financial means to return his body home he was buried in a pauper’s grave, with just a pair of handlebars as a headstone. TT start-line flagman Rueben Harveyson was so incensed at such an injustice that he called a riders’ meeting in Belfast later in the year, and as a result the embryo of the TTRA was formed.
Support from the top men was instant. By 1951 the association was born and the charity was up and running. The founder members’ list read like a who’s-who of racing. Lincolnshire ace Freddie Frith was quickly on board, and became the first President, and he was joined by Alex Bennett, Irish star Stanley Woods, Jimmy Simpson and others. Membership fees were set at £1 for life and by the end of the first year donations had been made to the ACU Benevolent Fund and the Island’s main hospital, Nobles. This ACU donation was, perhaps, the foundation for the tent, which was made available, on the suggestion of the ACU’s Ken Shierson, in which riders and team members gathered after TT practice periods and on race days.

Amazingly one of the first TT Riders’ to feel the benefit of the funds collected was Norton star Tim Hunt, who was the first rider to win two races in a week back in 1931. 30 years later he had great need of the TTRA.

To this day the aims of the association remain the same. Riders, and their families, who face real hardship are helped in some small way. Of course this work goes largely unnoticed. And so it should. But the sting in the tail for the TTRA is that by hiding its light under a bushel, the association finds it that much more difficult to cast the fund-raising net further afield.
In its first year a luncheon was held with just 55 members and guests sitting down. The luncheon became an annual event, and has grown in stature such that no one at the first gathering would recognise the current extravaganza. Now held at the National Motorcycle Museum, Birmingham, the 2001 luncheon saw over 600 members and guests sit down together. 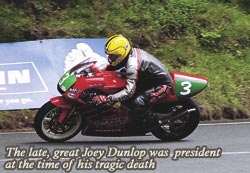 Original assistant secretary Norman Scott, himself a TT rider in 1921 and an Irish road racer, eventually took on the treasurer’s role, and moved the TTRA into serious fund-raising mode. By involving North of England businessmen Alf Sutton and Bert Warner, and enrolling them as patrons, serious amounts of money started to be generated. One of the first things the pair introduced was the auction, which is now an established part of the post-luncheon activities. Large amounts are now generated from items of TT memorabilia which have been generously donated.

Although membership of the association itself is restricted to those who have started in a TT race, it is possible for other enthusiasts of the Island races to attend the luncheon, by invitation of a member, and to give something back to those who entertain each year on the most demanding of courses. And a recent development, The Friends of the TTRA, has been founded. Using the same principal as Norman Scott’s patron theory, ‘Friends’ are not former TT Riders but are influential business people and supporters of the races who can encourage fund raising from different sources. Although they have no say in the running of the business of the Association, the Friends have already proved invaluable when it comes to generating cash.
All who support the TT do so because they appreciate it is no ordinary race. It is the Everest of racing.

No event offers either the rider, or the spectator for that matter, so much satisfaction. But sadly when it bites back it really means it. In common with all medical facilities, the Island’s Nobles Hospital is always struggling for funds, and the TT and Manx Grand Prix races put a tremendous strain on services. For this reason they have felt the benefit of the TTRA’s funds over the years. On the spot equipment has been purchased for the helicopter-bound medical team. I felt the benefit of that helicopter service first-hand, so I can vouch for its value, as well as hospital-based equipment. 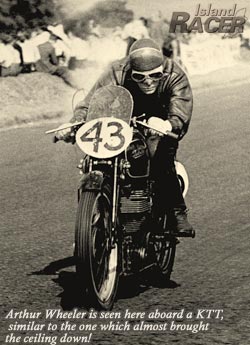 Just across the water from the Island, Southport Spinal Unit deals with the more badly injured from the races, and they too have been supported in their sterling work. Add to this the (obviously) anonymous assistance given to injured riders and bereaved families of TT Riders, and the purchase of marshals’ shelters and seats around the TT course, and you start to get something of a picture of the value of the TTRA’s contribution to your annual TT fix.
Don’t get the idea that the TTRA is all about serious business and no fun. The 1971 President, the late Arthur Wheeler, while basking in the glow of post-dinner refreshments, came up with the idea of firing up the KTT Velocette which was on display in the dining room. He was aided and abetted by the bike’s owner, Ivan Rhodes, and the resulting din not only almost brought the ceiling down but proved so popular that it is now an annual event. Recent memorable occasions have seen wheelchair-bound President Tony Jefferies enter the dining room aboard a howling Rob North Triumph Triple, with son David and others waiting to catch him in front of the top table.

The club shares a permanent portacabin base with the Manx Grand Prix Riders Association behind the Grandstand on the TT course. This forms a meeting point for some real stars, both past and present, and if you wish to fill up your autograph book you would do well to make a beeline for it during this years TT.

And if anyone ever asks you for a donation, well, now you know who you are giving your money to. Your few quid is going straight back to help those who have provided you with so much entertainment.