Registered Charity
No. 546 (Isle of Man)

The TTRA: Badge of Honour

Even seasoned TT goers don’t really understand what the beautifully cared for Portakabin, tucked away at the back of the TT Grandstand, which proudly boasts the logo TTRA 38th Milestone, is all about. Malc Wheeler explains what’s behind the initials and the reason they exist.

It’s only when things go wrong, when help is really needed, that the TT Riders' Association enters the consciousness of a past or current TT rider or their family and friends. To most that have seen the association’s headquarters tucked away behind the TT Grandstand or been fortunate enough to attend the annual luncheon, the TTRA appears to be something of an old boys' club.

Nothing could be further from the truth. The mix of manufacturer-supported stars, on works machines, and penniless privateers on home prepared bikes which you can see at today’s TT is not new in road racing. It was this unequal struggle that provided the original inspiration for the TT Riders' Association. Back in the 1940s and 50s factory supported stars had contract clauses which included accident insurance, and even funeral expenses.

The rest of the pack spent a year’s salary just to compete in the world’s greatest road race and they had nothing left for such cover. Consequently when things went wrong events invariably brought about untold hardship for the riders’ unfortunate families. During the 1949 races a rider crashed and was killed.
Having no financial means to return his body home he was buried in a pauper’s grave, with just a pair of handlebars as a headstone. TT start-line marshal Rueben Harveyson was so incensed that he called a riders’ meeting in Belfast later in the year, and as a result the embryo of the TTRA was formed. Support from the top riders was instant and by 1951 the association was born and the charity was up and running.

The founder members’ list read like a who’s-who of racing. Lincolnshire World Champion Freddie Frith was quickly on board, and became the first president, and he was joined by Alex Bennett, Irish star Stanley Woods, Jimmy Simpson and others. Membership fees were set at £1 for life and by the end of the first year donations had been made to the ACU Benevolent Fund and the Island’s main hospital, Nobles. Amazingly, one of the first TT Riders to feel the benefit of the funds collected was Norton star Tim Hunt, who was the first rider to win two races in a week back in 1931. Thirty years later he needed the support of theTTRA. 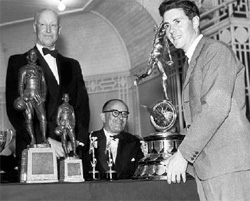 Even those who think they know what the TTRA may be about often miss the point. For several years the association was involved in the organisation of the TT Lap of Honour. And it was this massive PR opportunity that was missed, leaving those on the other side the fence believing the sole purpose of the TTRA was to gather together aged riders, and equally ancient machinery, to enjoy just one more dash around the Mountain.

Sadly, that is a memory that has stuck, and while the lap of honour did, on occasion, create funds for the charity to spend on needy TT riders and their families the chance to spread the word was for the most part missed. The values and aims of the TTRA haven’t changed in the 59 years it has existed. Riders, and their families, who face real hardship, are helped as much as is possible and for as long as is necessary.
By its very nature, confidentiality is everything, this work goes largely unnoticed. But the sting in the tail for the TTRA is that by having to hide its light under a bushel the association finds it that much more difficult to cast the fundraising net farther afield. It also comes as a surprise to find that an organisation founded out of necessity in the 1950’s should still be needed in 2010, but needed it most definitely still is.

Just as you might expect from a group of fun loving ex-racers, the TTRA isn’t just about the serious and tragic stuff. Each year the association hold their annual luncheon, a major fundraiser for them, at the National Motorcycle Museum, when the air is buzzing with tales of TT legend, as 600 former TT riders, families and guests sit down together.

The early luncheons were strictly men only affairs, but, in a quirk of irony that Norman Scott would have smiled at, the current secretary is Manx resident Frances Thorp, whose husband Tom was himself a TT star.
The climax to a great day, in even greater company, is the auction, which puts thousands in the pot, to be spent on those in need through injury or age or in the very worst cases those who have paid the ultimate price for the sport they loved. All who support the TT do so because they appreciate it is no ordinary race. It is the Everest of racing. No other event offers either the rider, or the spectator for that matter, so much satisfaction. But sadly when it bites back it really means it.

In common with all medical facilities, the Island’s Nobles Hospital is always struggling for funds, and the TT and Manx Grand Prix races put a tremendous strain on services. For this reason they have felt the benefit of the TTRA over the years. On the spot equipment has been purchased for the helicopter bound medical team too (Having felt the benefit of that helicopter service first-hand I can vouch for its value), as well as hospital-based equipment. 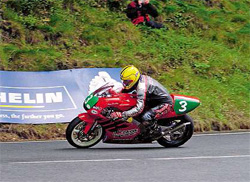 Just across the water from the Island, Southport Spinal Unit deals with the more badly injured from the races, and they too have been supported in their sterling work. Add to this the (obviously) anonymous assistance given to injured riders and bereaved families of TT Riders, and the purchase of marshals’ shelters and seats around theTT course, and you start to get something of a picture of the value of the TTRA’s contribution to the world’s greatest road race and those who make it what it is. The funds are administered by the president, currently TT legend Phillip McCallen, the treasurer, secretary and a committee made up of former TT riders.

Don’t get the idea that the TTRA is the only organisation helping TT riders and their families. The ACU Benevolent Fund works closely with the TTRA and together they put a tremendous amount back into the sport. Although the ACU often comes in for criticism the ACU Ben Fund works away quietly and confidentially in the background, helping not just riders but also officials, without whom there would be no racing, and their dependants.

ACU Ben Fund raises money through the annual sale of TT badges and also relies on donations and bequests, but in difficult financial times they can do with all the help they can get. You can help the fund and put something back into the sport by buying a great reminder of the TT for just £2.50. Contact the ACU Benevolent Fund at ACU, Wood Street, Rugby, Warks CV21 2YX or via the ACU website.

A FRIEND IN DEED

Although membership to the TTRA is only open to those who have started in a TT race there is an off shoot organisation, The Friends of theTTRA, which allows enthusiasts, who have enjoyed the spectacle of the TT or been involved in some way, to put something back. Membership to FOTTRA costs a minimum £150.

The Friends of the TTRA uses the same principal as that of the association and members are encouraged to get involved in fundraising from different sources. Although they have no say in the confidential business of distributing the funds the Friends have already proved invaluable when it comes to generating cash. TT riders, whether current or retired, can join the TTRA by contacting FrancesThorp at TTRA, Mountain View, Glen Maye, Isle of Man francesthorp@manx.net or at the 38th Milestone, the headquarters of the TTRA situated at the rear of the TT Grandstand during TT or Manx Grand Prix race week.
Frances is also the first point of contact for application forms for FOTTRA.

Have you ever raced in the Isle of Man T.T. Races?
If you have, are you a member of the T.T.Riders Association?

It is only possible to be a member of this exclusive "club" which was formed in 1951 by racers for racers.